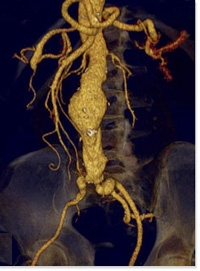 Abdominal Aortic Aneurysm (AAA) affects an estimated 4%-8% of men 60 and older, and is a largely preventable cause of death. Findings from recent large population-based studies support ultrasound screening in older men to reduce AAA-related mortality, and has led the U.S. Preventive Services Task Force (USPSTF) to support this test.

The Multicentre Aneurysm Screening Study (MASS), the largest randomized controlled trial (n=67,800) of men aged 65-74 years, found that death due to AAA decreased 42% in the screened group of men aged 65-74 when compared to an unscreened control group. Surgical mortality was 6% after elective surgery following screening and 37% after emergency surgery. Similar results were found in other large controlled trials.

In response to these findings, the USPSTF now recommends one-time screening for men aged 65 to 75 who have ever smoked. The USPSTF states that "clinicians must individualize recommendations depending on the patient's risk and likelihood of benefit for those patients younger than 65 and for female patients."

Most people with AAA are asymptomatic. As many as 1 in 3 abdominal aortic aneurysms eventually rupture if left untreated, leading to death within minutes. The most common symptoms include general abdominal pain or discomfort.

Using ultrasound to screen for AAA is risk and pain-free with a sensitivity of 95% and specificity of nearly 100%. No preparation is required. Abdominal palpation has poor accuracy and is not an adequate screening test.

Medicare now covers a one-time AAA screening ultrasound study if the referral results from the initial preventive "Welcome to Medicare" physical exam or if the patient has a family history of AAA or pertinent risk factors as listed above.